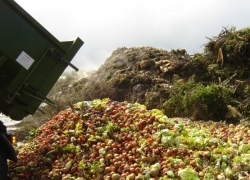 Global demand for food is expected to increase by 70% by 2050, while a steep increase in biomass use will also put pressure on agriculture. Feeding the world without damaging the environment is the focus of World Food Day 2014 – and the goal of several EU-funded research projects.

The EU is investing over €4 billion in research and innovation for a European bioeconomy that makes the most of our renewable biological resources. Agriculture is a key component, securing food production, ensuring the sustainable management of natural resources, and supporting development in rural areas.

The EU is the source of 18% of world food exports, worth €76 billion. But in the EU and elsewhere, agricultural waste is holding farmers back and costing taxpayers money – between €55 and €99 per tonne.

Turning agricultural waste into animal feed – the solution favoured by EU-funded research project NOSHAN – would open up new opportunities for farmers while cutting Europe’s dependence on feed imports. This would, in turn, create new green jobs in waste collection, treatment plants and feed manufacturing. The concept will be particularly welcome in rural areas, where growth is less intensive than in urban areas, and where the feed industry is a powerful economic engine.

“One third of food produced for human consumption is lost or wasted globally – a total 1.3 billion tonnes a year – and food processing produces a large amount of this waste,” explained NOSHAN scientific coordinator Montse Jorba of the LEITAT Technological Center in Spain. “Fruit and vegetables have the highest wastage rates of any food. This amounts to a major squandering of resources, including water, land, energy, labour and capital.”

The NOSHAN project will turn food waste – in particular fruit, vegetables and dairy – into animal feed, at low cost and, while keeping energy consumption low.

The team – research centres, a university and companies from six EU countries plus Turkey – began in 2012 by assessing the value of various types of waste, building up a database of potential feed ingredients. By the time the project ends in 2016, the team will also know the best technologies for extracting and upgrading each waste type.

NOSHAN also presents Europe’s agricultural sector with an opportunity to achieve greater sustainability. Using bio-waste as a resource will help the sector to reduce its environmental impact.

The processes developed by the project will help agri-businesses to recover the calories contained in food thrown away, the energy that went into producing this food and also lead to a significant decrease in water use (food waste accounts for more than a quarter of total global freshwater consumption). By reducing the need for separate feed production, the NOSHAN approach could reduce increasing competition between food and feed production – both of which need land and water.

NOSHAN is also working on functional feed ingredients derived from food waste that target specific animal needs, such as health promotion or disease prevention. For example, researchers are currently identifying functional fibres and peptides (chemical compounds) within waste. These will be used to develop feed products tailored to pigs and poultry.

Safety is guaranteed through an intensive monitoring process, covering everything from raw waste to the final product. Safety, together with the technical and economic viability of each process studied, will ultimately decide which strategies and products the NOSHAN team commercialises.

“The bioeconomy in Europe is worth 2 trillion euro and provides 22 million jobs, which is why it is a focus of Horizon 2020,” said EU Research, Innovation and Science Commissioner Máire Geoghegan-Quinn. “Projects like NOSHAN bring together researchers and businesses to boost our economy and our quality of life in a sustainable manner.”

The NOSHAN project has been awarded just under €3 million in funding under the European Union's Seventh Framework Programme for Research and Technological Development (2007-2013). It brings together research institutes, a University, large industries and SMEs in the food sector from Spain, Belgium, Italy, Germany, France, the Netherlands and Turkey.

On 1 January 2014, the European Union launched a new research and innovation funding programme called Horizon 2020. Over the next seven years almost €80 billion will be invested in research and innovation projects to support Europe’s economic competitiveness and extend the frontiers of human knowledge. The EU research budget is focused mainly on improving everyday life in areas like health, the environment, transport, food and energy. Research partnerships with the pharmaceutical, aerospace, car and electronics industries also encourage private-sector investment in support of future growth and high-skilled job creation. Horizon 2020 will have an even greater focus on turning excellent ideas into marketable products, processes and services.

International Conference on Technology and Entrepreneurship