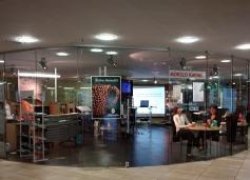 So ends another autumn exhibition at Aleksandras Stulginskis University. During the exhibition Nemunas Valley developed its own exposition, which introduced innovative products, research laboratory achievements, services, and invited people to get acquainted with the scientists and taste their developed products. The main aim of the exhibition was to introduce increasingly more active Valley laboratory operations and acquaint visitors with researchers/innovators.

The exposition paid special attention to Aleksandras Stulginskis University professor Simas Gliožeris, who has engaged in flower selection for many years. When asked about himself the professor laconically replied, “I am a creator.” So his incredible plant works had to speak for themselves, one of which is dedicated to the President of Lithuania Dalia Grybauskaitė. It is a Lithuanian Asarina whose full name is “Lophospermum x Lituanicum Dalia Grybauskaitė.”
The professor’s activities are identified in literature as decorative and bean plant stocking, reproduction, and selection. During his three decades of activity he has collected an open and closed soil ornamental plant collection, created begonias, Calla Lilies, Margens, and buttercup hybrids and has bred about 100 new plant varieties.
He named two derived varieties of Asarina after the English throne’s heir, Prince Charles, and his wife, and a variety of begonias after Pope John Paul II.
Association staff believes that it is time the professor commercialized his activities and the products he’s come up with so that they carry not only moral but also material benefits to the professor’s parent university, the professor himself, and society. The huge interest in flowers grown by the professor shows the public eagerly awaits them on sale. Thus, the association’s task is clear: commercialization.
This is just one example of something the exposition addressed in detail, but there were others, too. Visitors were able to see, learn, and taste the innovative products developed. The exposition organizers will try to present what the valley researchers have newly created in the future, too, to introduce the scientists themselves and commercialize their creative results.