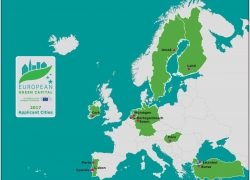 EU Environment Commissioner Janez Potočnik said: “The European Green Capital Award is a mark of excellence for cities cherishing their environment. We are already in the eighth year of this competition and it is gratifying to see many of Europe’s great cities applying and indeed re-applying for the Award. The winners to date have provided inspiring examples of how cities can change. I wish all the applicant cities the very best of luck in the 2017 edition.”

The European Green Capital Award is recognition of a city at the cutting edge of environmentally-friendly urban living. These cities lead the way in setting higher standards in sustainable urban development, listening to what their citizens want and pioneering innovative solutions to environmental challenges.

An international Expert Panel will perform a detailed technical assessment of each entry, on the basis of 12 indicators covering ambient air quality; climate change, mitigation and adaptation; eco-innovation and sustainable employment; energy performance; green urban areas incorporating sustainable land use; integrated environmental management; local transport; nature and biodiversity; quality of the acoustic environment; waste production and management; wastewater treatment; and water management. Following the technical evaluation, a number of cities will be shortlisted for the 2017 title.

In June 2015, the shortlisted cities will be invited to make a presentation to an international Jury.  The Jury will evaluate their commitment to continuous environmental improvement, the level of ambition of their future goals, their communication activities for citizens, and the extent to which they could act as a role model and promote best practice in other European cities. In addition to being an inspiration to others, the winning city will raise its profile, enhance its reputation as a place to visit, work, play and live.

The winner will be announced at an Award ceremony in June 2015 in Bristol, UK, the 2015 European Green Capital.

The European Green Capital Award is the outcome of an initiative taken by cities with a green vision. The concept was originally conceived at a meeting in Tallinn, Estonia, held on 15 May 2006, on the initiative of Mr Jüri Ratas, former Mayor of Tallinn, where 15 European cities and the Association of Estonian cities signed a joint Memorandum of Understanding on the establishment of such an award.

Seven cities have been awarded the title of European Green Capital since its inception in 2010. Stockholm, Sweden won the inaugural title, followed by Hamburg, Germany in 2011, Vitoria-Gasteiz, Spain in 2012 and Nantes, France in 2013. The current holder for 2014 is Copenhagen, Denmark. Bristol, UK will hold the title for 2015 and will pass it to Ljubljana, Slovenia for 2016.

Europe is now an essentially urban society, with more than two thirds of European citizens living in towns and cities. Many environmental challenges facing our society originate from urban areas but it is also these urban areas that bring together the commitment and innovation needed to resolve them.